As anti-refugee and anti-Muslim sentiments seem to be trending in today’s global media conversation, we feel the importance of countering some negative stereotypes. These oversimplified formulations aren’t always bad. They help to create quick reviews and opinions on any given situation. This can be quite useful. Because let’s be honest, nobody has time to keep entirely up to date on today’s global issues. Not to mention the occasional scariness of the unknown. Creating a simplified image can help to get an overall idea of what’s going on. Unfortunately, there are always people misusing the underlying uncertainty for personal gain. But here is the thing about stereotypes. They are never 100% true. The truth is always that gray zone somewhere between black and white. As soon as people start interacting, stereotypes usually won’t hold their grounds for very long. So, to help you get a little closer to that gray area, we would like to present the story of the Syrian Scientist by Brandon Stanton, mixed with some reactions this story triggered. Also, be sure to check up on the Syrian scientist.

“My parents were supportive of my education, but they didn’t direct me. My father was a farmer and my mother was a housewife. They did not know much about science. But I was determined to become a scientist through my own personal will. I graduated high school with the third highest scores in all of Syria. I worked construction in the evenings to pay for my school. Even as a teenager, I was being given construction sites to manage. I graduated from university at the top of my class. I was given a scholarship to pursue my PhD. I suffered for my dream. I gave everything. If I had 100 liras, I would spend it on a book. My ultimate goal was to become a great scientist and make a lasting contribution to humanity.”

You probably know Humans of New York (HONY), or you must at least have heard about it. It’s a blog & book by photographer Brandon Stanton, featuring portraits and interviews of the people of New York city. It started in 2010 and has become a big success. After it’s initial start, it has grown to be a platform followed by millions of people. This year Stanton decided to expand his focus and traveled the world to collect stories of people from nearly twenty different countries. Including Iran, Iraq, and Pakistan. But it’s his most recent portraits that couldn’t be more relevant to today’s state of mind.

“Our marriage wasn’t arranged. We married out of love. We met when we were students at university. She was studying law. We built a family together. We were a very modern family. We had good days and bad days and rich days and poor days but we were always together. We ate every meal together and educated our children well. My daughter was studying to be a doctor. My son was the smartest in his school. We were well known in the community. Nobody had a problem with us. We had no affiliation with any party or regime. Everyone loved us, honestly.”

By collecting the stories of refugees in Jordan and Turkey who have just been cleared to resettle in the United States. In collaboration with UNHCR, he manages to provide a personal glance into the lives of the people fleeing from war and persecution. This personal introduction of a handful of the 10,000 new Syrian Americans has not gone unnoticed. Over the last few days, this story alone was shared more than 80,000 times on Facebook.

“I built this compound for my family. I saved the money for it, I designed it myself, and I oversaw the construction. The first missile tore through the yellow house and exploded inside the pink house. It was a government anti-personnel missile. They are not supposed to be used in residential areas. Inside were 116 small bombs, and each bomb was filled with needles and shrapnel. The pink house belonged to my brother and his entire family was torn to pieces. The second missile landed in the green house but did not explode. That was my house. If the missile had exploded, I wouldn’t have any children left. But it only destroyed the top floor where my wife and daughter were. Sixteen people died in the attack. Seven were from my family.“ 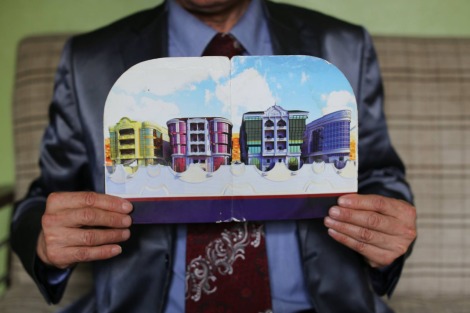 Even US President Barack Obama commented on Stanton’s portrait of the Syrian scientist by offering him a warm welcome to his new home in Michigan. Obama himself is no stranger to Stanton since he was interviewed and portrayed for the Humans of New York blog himself. When President’s start leaving personal messages under blog posts on Facebook you can imagine something big is going to happen as a result.

And it did. Hollywood actor Edward Norton decided to take the lead. In an email to Stanton, published on HONY’s Facebook page, he said: “I’ve rarely been shaken by a story more than the scientist’s. His life had been so tragic, but throughout the entire interview, he kept returning to his desire to help mankind. He didn’t want to die before making a contribution to humanity, and he felt that he was running out of time. While listening to him, I kept imagining how difficult it would be for him to focus on any sort of research while starting a new life in America. Despite his lofty accomplishments, he might have to take whatever job (or two) he could get just to keep up with rent. Hopefully this fundraiser will change that, insuring that he can focus his amazing mind on his dream of changing the world.”

“I was overseeing a project outside the city when the missile hit my house. Nobody was around to help, so my son had to carry the pieces of his mother and sister out of the house. He was fourteen at the time. He was so smart. He was the top of his class. He’s not the same. Right after it happened, he’d write ‘mom’ in his notebook over and over. He’d cry all night long. Two years have passed but he’s still suffering very much. It’s very hard for him to focus. He gets tired very easily. My daughter was in the house too. She still has shrapnel in her neck. We survived but we’re dead psychologically. Everything ended for us that day. That was our destiny. That was our share in life.”

This morning the Crowdrise fundraiser reached $445,480 USD and is still counting. The money raised will go directly to the medical treatment of the Syrian Scientist and will help him and his family to rebuild their lives in Michigan. Giving him the opportunity to focus his energy on his ability and will to change the world.
“Everything that wasn’t destroyed in our house was stolen over the next two days. We left with nothing. I can’t even pay the rent of this apartment. I’ve been in Turkey for two years now. I’m dead here. I have no life, no respect, and my children aren’t going to school. I have a PhD but I’m not allowed to work without a residence permit. There is a university here that is teaching with a book I wrote, but still won’t give me a job. In order to survive, I’m forced to create designs and give them away to Turkish citizens, who take all the credit and pay me barely enough money to cover the costs of my materials. This year I created blueprints for a giant construction project of 270 big houses. I was paid maybe one percent of what a Turkish citizen would have earned. There is no respect for my work here. Only money is respected.”
It’s stories like this, that give back that faith in humanity that seems lost from time to time. Of course, this story is quite big. Presidents, movie stars, millions of people stepping up, but there are plenty of these stories to go around. All you need to do is keep your eyes and ears open to notice them. Give it a try!
“I had no problems before the bombing. I think the cancer came from my sadness and my stress. It’s in my stomach. It’s getting more and more painful. The only reason I can speak to you right now is because I’ve taken a painkiller. I can barely eat. I’m bleeding internally. I’ve gone to five hospitals here. They tell me there’s nothing they can do, especially because I have no insurance and no benefits. My friend in America tells me that it’s an easy surgery, but I’m fighting against time. It’s spreading, and I think that soon it will move beyond my stomach. And then there’s nothing I can do. I still think I have a chance to make a difference in the world. I have several inventions that I’m hoping to patent once I get to America. One of my inventions is being used right now on the Istanbul metro to generate electricity from the movement of the train. I have sketches for a plane that can fly for 48 hours without fuel. I’ve been thinking about a device that can predict earthquakes weeks before they happen. I just want a place to do my research. I learned today that I’m going to Troy, Michigan. I know nothing about it. I just hope that it’s safe and that it’s a place where they respect science. I just want to get back to work. I want to be a person again. I don’t want the world to think I’m over. I’m still here.”

One response to “The scientist from Syria”